First thing I wanted to tackle recording in this project is Brigitte’s weapon. The Flail usually has a chain which extends in the game, but that was way too impractical for any kind of convention wear. So here is the breakdown of how I’m constructing the piece as its most basic version. 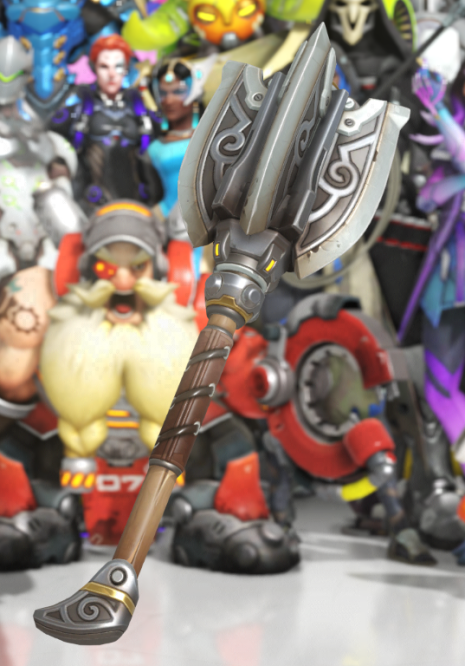 I had a spare piece of card tubing around which I covered in rolled cardboard to create a more sturdy handle for the flail. I had no idea how heavy it was going to be when I completed it, so figured I would give it as much strength as I could in the early stages.

I cut it to an appropriate length and covered the whole thing in duct tape just to keep it together.

While the handle was still unattached, I ended up making the end-piece for it. I wrapped a piece of spare 10mm foam around the end, and cut it to the right shape. I cut a triangle to fill the middle space and attached a base of 1mm foam. I free handed the detailed engravings around and opened them with heat. I put a small strip of 1mm foam around it for the trim.

This was just a rolled up piece of 10mm EVA. I rolled it into a tube and attached it together with glue. Moulded it around to the right shape with a heat gun so it would keep the shape better.

I drew around this base so I could easily create templates for the top and bottom, which I’d need to seal up later after attaching the handle. I created the top from bits of 10mm EVA  – One slightly smaller than the circumference of the base, and one much smaller for the detailed part at the top. I then lined up the handle under these parts and created an indent there to be able to sink the end in; I was able to glue the handle to this later with ease.

For the bottom, I made a similar piece slightly smaller than the circumference of the tube, and cut a hole in the middle of it the size of the handle. I was later able to slide this up the handle and attach it all to the base, creating the bottom.

Made a template for the blades themselves. Cut out 8 pieces of these, and stuck them together in pairs along the blade edge; makes kind of a triangle shape. Once paired, I took my rotary tool and sanded away the angle on the pointed end to create a true point for the blades.

From there I took each blade piece and ended up eyeballing it with a template to create the tops and bottoms of the blade. Just stuck the pieces in from scraps and stuck some putty in any gaps to smooth it out. Took the rotary tool to it again just to tidy up any seams that weren’t right. I chose not to put a back on the part of the blade that attached to the base, purely because the cylinder shape made it easier to attach just the back edges. This made it way more flush with the base which was helpful.

From there, I took the four completed blades and attached them with glue to the Blade Base. I marked where they should be positioned beforehand to make it easy.

Between the four blades, I put some extra EVA strips in between to create the blade divide. I made a template for these just to make sure they were all the same size, and I sanded down the sides to made sure the edges were tidy. I then cut some slits down the centre, and opened them with the heat gun.

Once these were attached, I went about detailing.

First, I cut 1mm foam templates for the blade faces (x8) for the raised area below the metal filigree. I attached these in the right place and then went back to the rotary tool to tidy up the areas I managed to not quite cover. This made the blade edges much better in terms of their uniformity.

I drew a template out for the metal filigree work on the blades themselves, and cut 8 of those, again from 1mm foam. I glued them onto the blade face area and boom, done! I did try using Worbla for this part, however it ended up using a whole bunch of it for a small section, it was fiddly and took a while to get to sit right. Super time consuming, so I recommend just using foam from the get-go.

I made little rolls of foam for the screw detail at the top of the blades, and added Worbla to the edges to create a better seam. 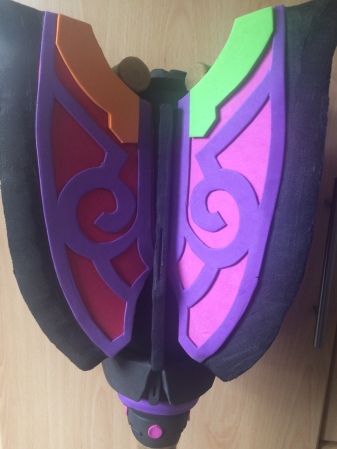 Attached the handle at this point, using the top and bottom pieces I made earlier. I then made another ring about 150mm thick to stick below the bottom-most piece. I left a little gap there to stay true to the design detail.

I took another piece of scrap 10mm foam and cut it along the middle to half the thickness. I took this strip and attached it below this piece. To create the final little ring, I just rolled up a piece of Worbla and attached it. I added little circles for the raised rivets in the middle section, however these aren’t 100% true to the model – they’re more tapered on her real flail. But this was a much better option for time saving.

I made some rhombus shaped pieces to taper from the bottom of each blade towards the bottom of the base piece. In the model, this is a fully tapered section but this was the easy solution I chose. I stuck each of these shapes with the point of the wider end below each blade divide. I held them in place with pins to make sure they were the right size before sticking them down. I was able to cut and edit them at will easily. Between the rhombuses, I stuck a smaller piece of scrap foam, put a slit int he middle of each and opened again with heat. I put in a few more lines and things that were needed for detail across the piece; I just looked at the reference pictures for help there.

With all the details finished, I reinforced the handle with a sheet of Worbla to make it much more durable for the convention scene. I then stuck the end-piece in place properly.

With all that madness done, it’s now just a case of priming and painting the details. Stay tuned for that, and pictures of the finished product in the next post.